Society For The Study Of Social Problems 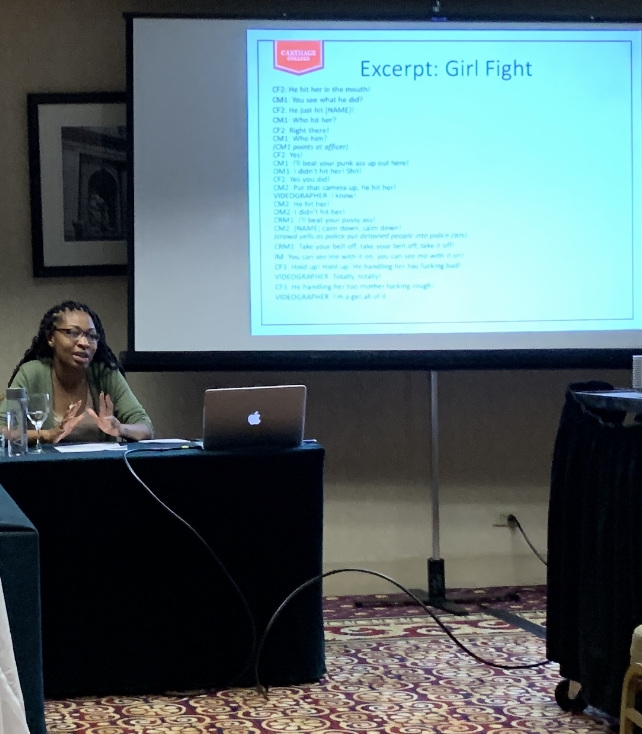 My primary research agenda explores the intersection of policing, mass incarceration, race, gender, and class. My research is committed to centering marginalized voices and experiences. I reveal the mechanisms that protect and reproduce social inequality. At the same time, I focus on resistance and possibilities for change. My work is informed by critical criminology, prison abolitionists, and Black feminist theoretical approaches. I primarily rely on qualitative methodologies and use first-hand experiences of disadvantaged communities to generate insights and new knowledge.

My doctoral research, The Milwaukee Moment: Oppression, Policing, and Possibilities, is a qualitative study that explores the causes and consequences of mistrust between the Milwaukee Police Department (MPD) and the Black community in that city. By way of eight focus group interviews with Black Milwaukee residents following the 2016 Sherman Park Uprising, this project reveals communal perceptions of crime, criminalization, and approaches to policing in a climate of extreme mass incarceration. Findings explore gendered nuances, common complaints, and impacts of current policing methods. While exploring experiences that negatively pattern the relationship with local police, residents offer possibilities for change that could restore trust and legitimacy of law enforcement in Black communities. Since collecting focus group interviews, I have expanded the project to include individual interviews with eight Black Milwaukee Police Department officers. I intend to incorporate this data into analyses for the forthcoming book.

In 2016, I reviewed the Ferguson Report by the Department of Justice Civil Rights Division for the ethnic studies journal Kalfou. Findings revealed that the approach to law enforcement by the Ferguson Police Department (FPD) and city officials reflect racial stereotypes and exacerbated existing racial bias. Furthermore, FPD’s policies and practices are shaped by the city’s commitment to target and prosecute petty violations aggressively to generate revenue rather than protect public safety. The Ferguson report exposed the long-standing racist policies of the FPD and municipal court system. The observed racial disparities in policing and municipal court practices were not caused by disproportionate unlawful behavior by Black people, but rather by illegal racial profiling by a police force that is overwhelmingly white in a city that is two-thirds Black.

In 2015, I completed my master’s research that was a study of police interactions with a Black community in San Francisco, CA. I used third party video records to examine the ways in which bystanders observe, participate, and intervene in street police-citizen interactions. Videos were analyzed using methods of analytic induction and visual coding schemes. Bystander participation dramatizes the limits of police authority as bystanders offer the subject of police encounters legal advice and creates derogatory experiences for the police.

From 2013-2014, I worked as a Graduate Research Assistant on a U.S. Army Office of Research and SRI International funded project entitled “Identifying Good Strangers: A Micro-Interactional Approach” under the direction of Co-Principal Investigators Dr. Nikki Jones (UC Berkeley) and Dr. Geoff Raymond (UC Santa Barbara). We analyzed video records from San Francisco and Seattle police department dash cameras to identify interactional practices that were likely to help police and military personnel de-escalate conflict and build trust during encounters with civilians. From this work, I co-authored a paper titled, “You Can’t Sit Here: the role of help in police-citizen interactions.” This project used conversation and interaction analyses to critique what we called the “move along” encounter. We evaluated the framings of “move along” requests to determine whether we could identify strategies of policing that could result in positive resolutions of police-citizen encounters and provide an alternative to other strategies that produce the very disorder that police presence purports to resolve. These findings have proved significant and useful, as this body of research will now influence police training programs in San Francisco.

I am a member of the American Sociological Association (ASA), the Society for the Study of Social Problems (SSSP), and the Association of Black Sociologists (ABS).